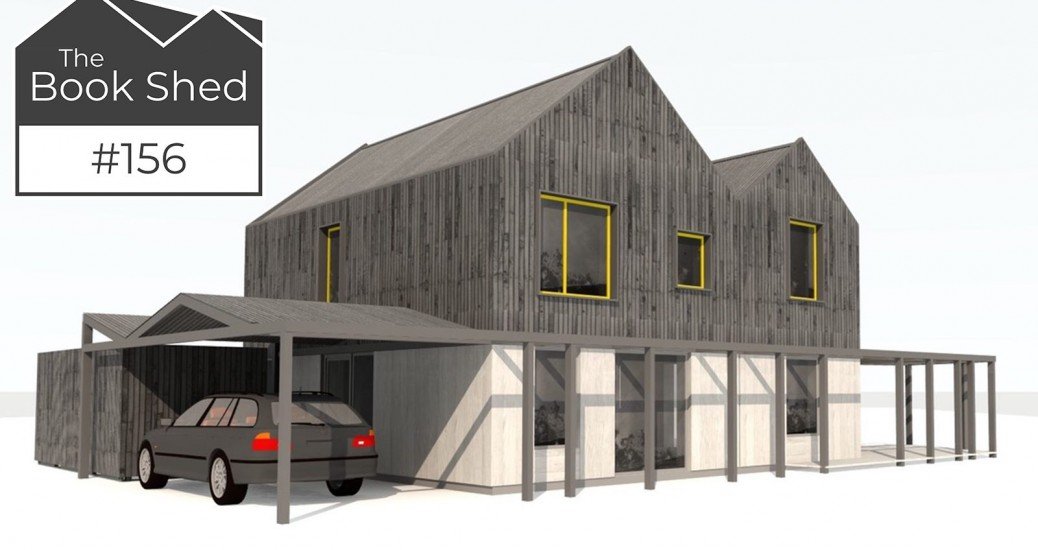 That bit in the previous post about about showing off our self-builds? Well that’s what we’re going to be doing here!

This is the Book Shed. 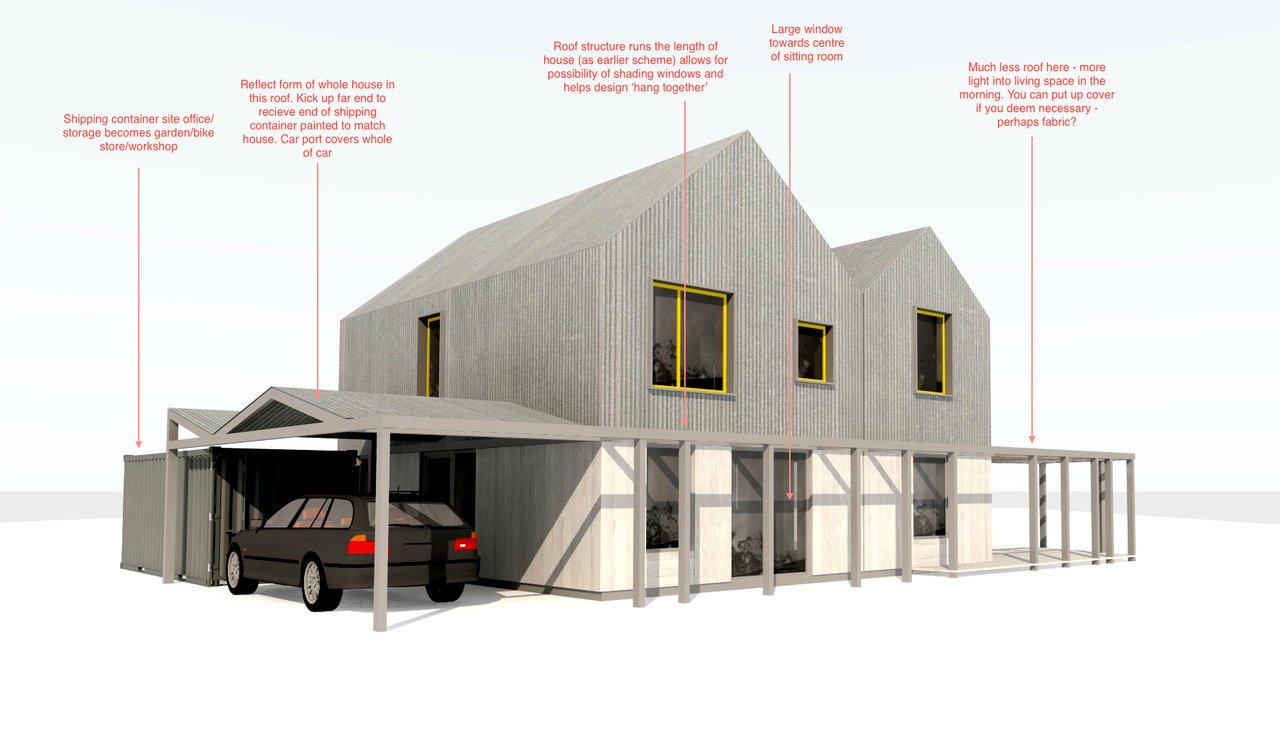 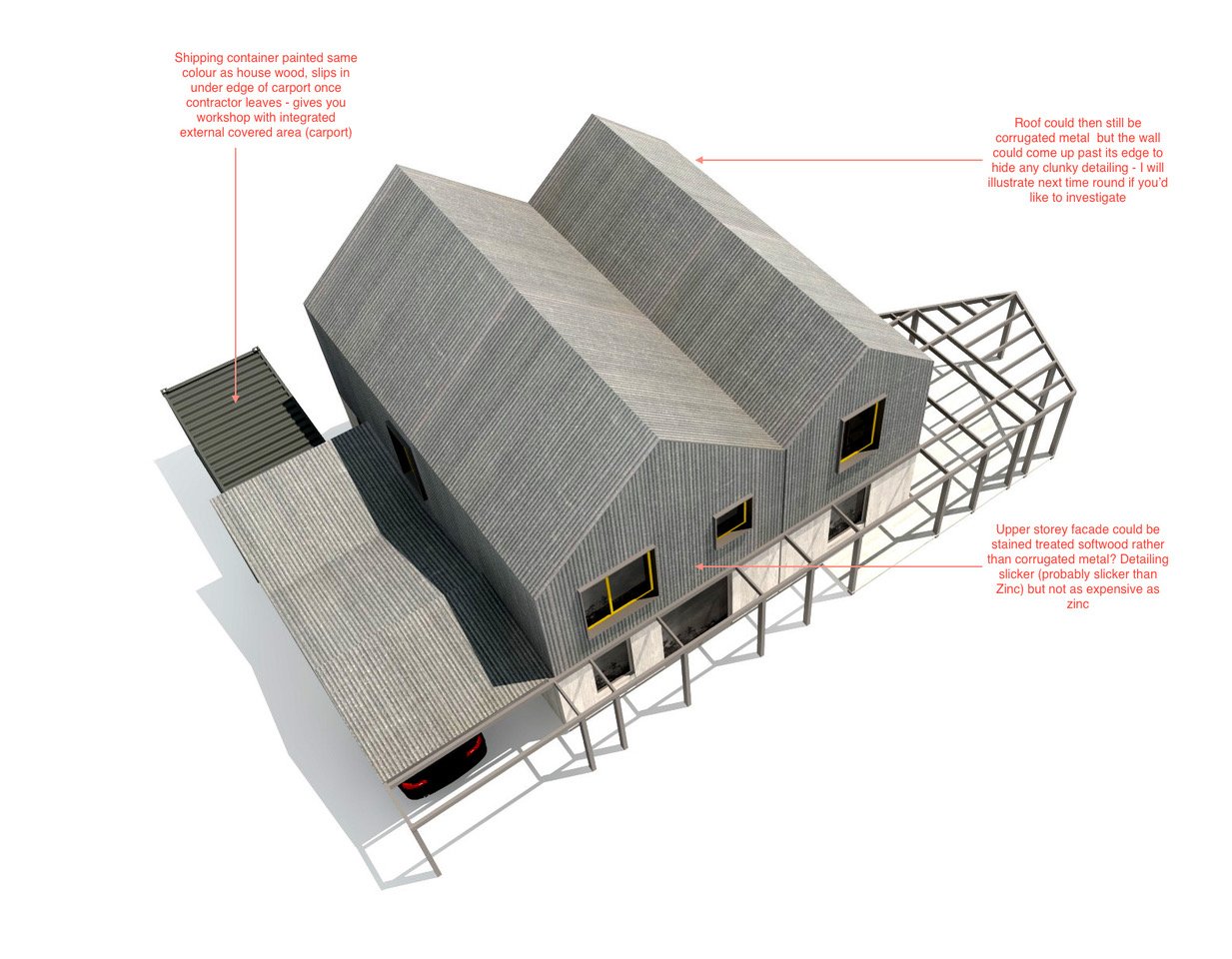 I’m still trying to convince Laura of the name but I hope that with enough marketing (blog, logo etc…) and persistence it’ll stick. It’s supposed to be a combination of Laura’s love of books, the fact we’re on Read Place, and the tagline we came up with during our first engagement with our architect: “The expensive shed”. Originating mainly from to our limited budget and preference for industrial style.

The elevations give a bit of a better feel for the finish as we’ll have a split between natural and charred (or painted) siberian larch cladding. Originally grey, the first story has been blackened and the windows made more neutral as opposed to the bright yellow accents seen above. All the rainwater systems will be plumed through the external cavity between our timber frame stricture and the cladding to achieve a neat and clean finish. The roof will be a dark corrugated metal inspired by Dualchas design from the the Isle of Sky. The finish of the edges around the roof will be particularly important for our build in order to keep to our simplified style. In essence it is a fairly contemporary house with a 10 x 10 meter footprint that sits fairly centrally on our site. North is towards the top left corner: It’ll be about 180 square meters in total with 5 bedrooms, only three of which will actually be rooms to begin with. The others will be multi function rooms until we need to renovate them at a later point. One of these has in fact been unusual enough that its been a defining characteristic of the design for many: the bunk room. On the first floor, it is more of a day room that is intended to host a very minor library and some day beds that can be converted into double beds for when our extensive families visit. It’s all about that flex capacity! 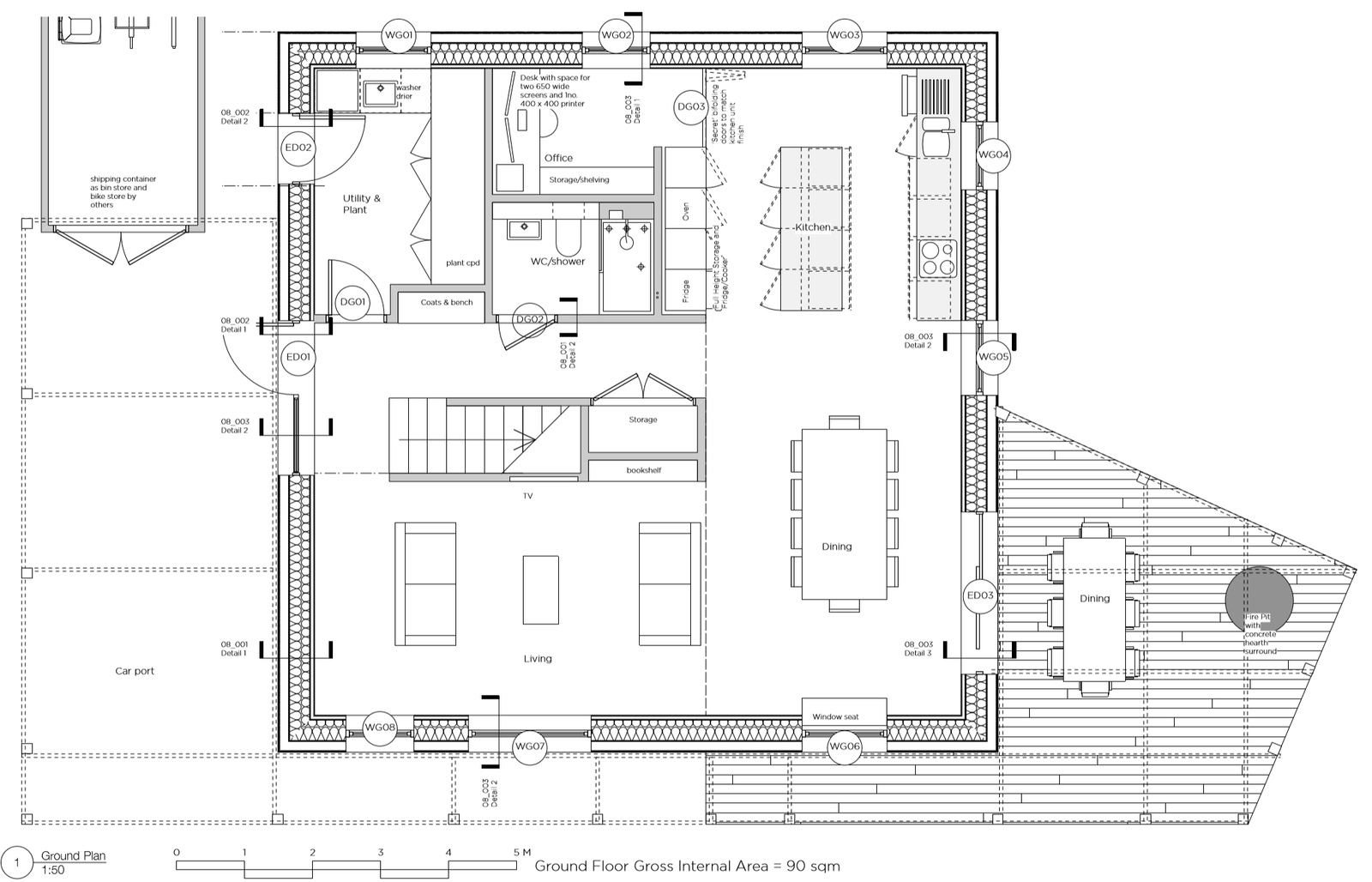 The majority of the ground floor is one large open area wrapping around the south end of the house, with the kitchen in the SE corner, dining room in the South and living room in the SW. We’ve tried to take a core utility approach like you’d see with many sky scrapers where all the systems and utilities are concentrated in a single portion of the building. This should serve to compact all of our utilities into a small area so as to reduce the length and number of runs for water, waste etc… all hoping to save on complexity and cost. An office is squeezed in at the back by the kitchen, hidden by secret folding doors designed to look like the tall kitchen units right besides.

The decking/pergola on the southern corner of the house faces the hill and swale park between phases 1A and 1B, hopefully allowing us to enjoy the views to maximum effect. The outdoor fire-pit addresses the Scandinavian itch for hygge whilst allowing us to enjoy the outdoors deep into the late autumn. Having a fireplace indoors just doesn’t make sense in modern houses with so much insulation where they can output more than twice the needed heating. It would become unbearable far too quickly! All heating is also provided via the ground floor UFH only, using convection to raise the heat up into the first floor and lots of insulation at the external walls and ceilings to make it effective (and efficient). 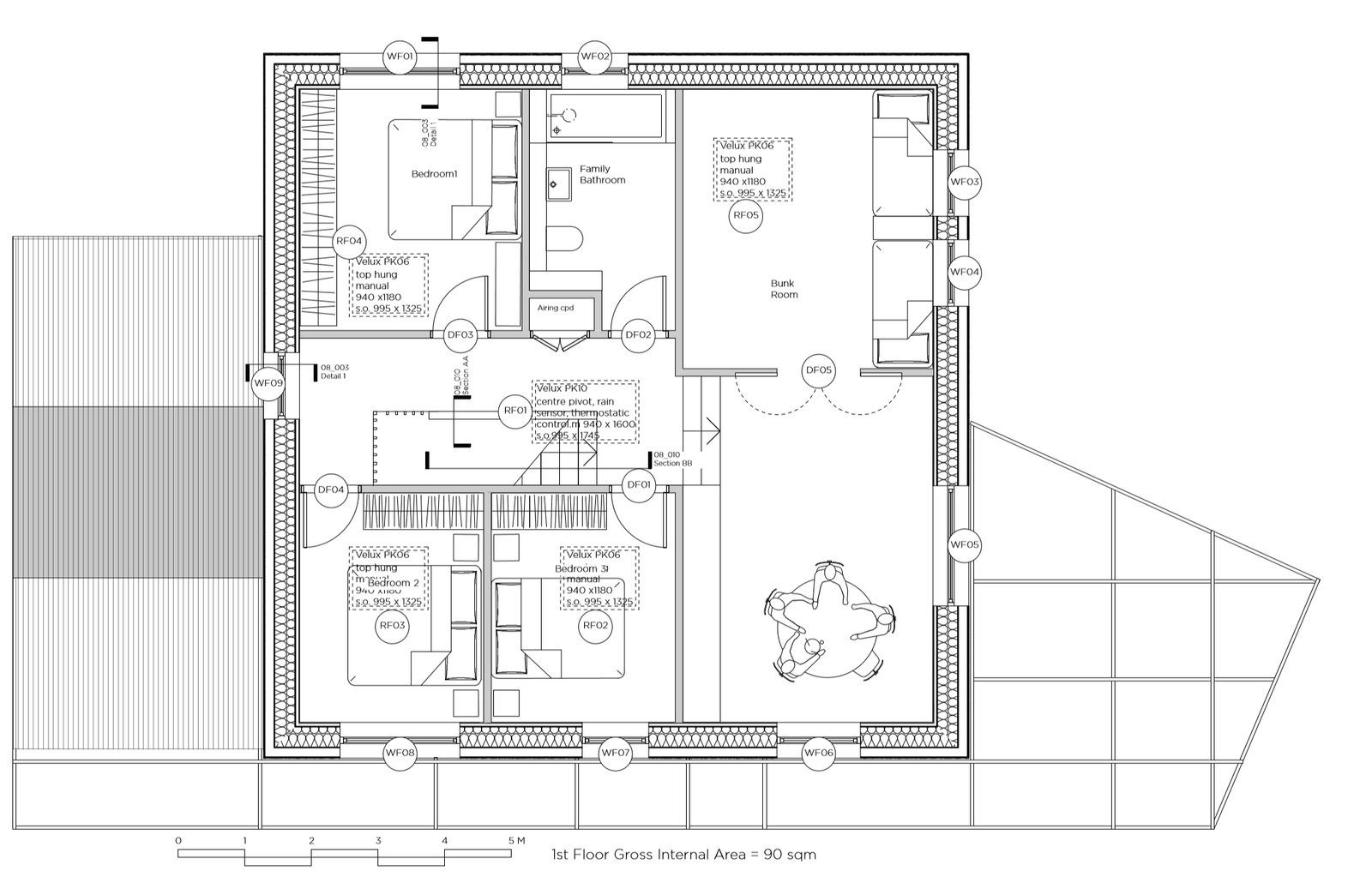 Upstairs you can see we focused on smaller bedrooms, going by the logic that they are pretty much only good for sleeping in. Granting them more space is an unnecessary luxury in an expensive build. En-suites have also been omitted entirely. Less bathrooms, less cost and more space. This may not be the current fashion, but that’s the best bit about building a house to suit us! A useful mantra we’ve used is “It’s someone else’s problem…”. Either our future selves for whomever we may potentially sell this to.

There are two multi-function rooms: the day/bunk room and the ‘games’ room which will effectively be spare space for whatever is needed, that is until we convert them into two additional bedrooms and another shared bathroom in-between. The bunk room will also contain a library and could be fitting with two more day beds to increase capacity up to a total of 8 if each bed was extended. Perfect for the extended families when they visit en masse.

Given the 10 meter breadth of the house we’ve opted to put in roof lights in 4 of the rooms and a larger sensor controlled one dead centre over the stairway. This roof light is particularly important as for about half the year our house will likely overheat without additional ventilation above and beyond the MVHR given the foot of cellulose insulation. It’ll be both temperature and rain controlled to make it automated. The remaining room will go without which hopefully will add an element of cosiness to a tucked away social space.

So that’s the Book House. Hope you like it and expect to see it erected in 2019!

It looks amazing !!! I like your mantra “it’s someone else’s problem” 🙂

The Book Shed – a great name !! There should at least be a mini plaque…somewhere 😉 xx