Our build on plot 91 Graven Hill 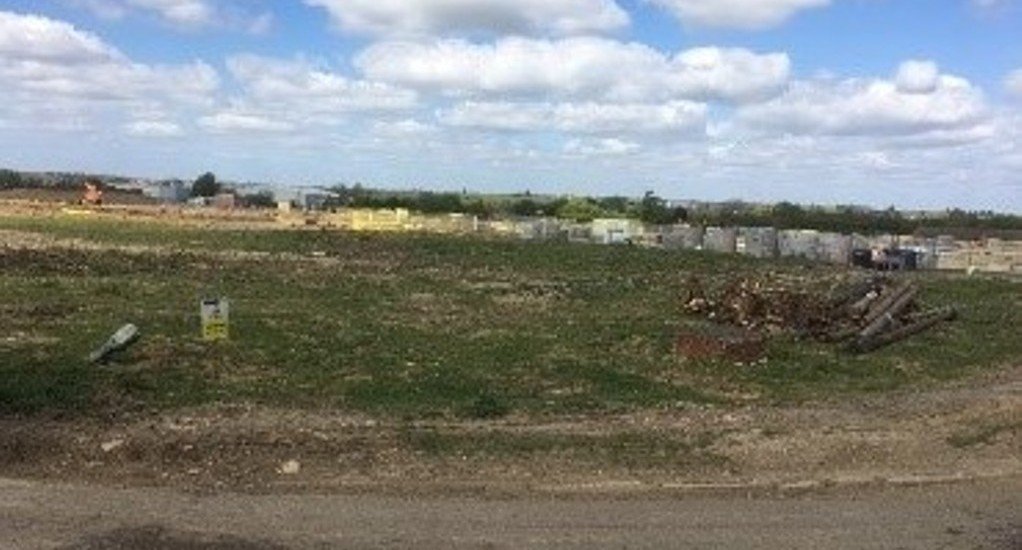 I stumbled on the Graven Hill website in spring 2015 and immediately signed up for the newsletter thinking, ‘we could do that’. We had been thinking about doing a self-build for a while but between the issues of price (too expensive), location (wrong), problems with the plot (steep slope/water logged/etc) we had not had much luck and thought maybe we would look for a house we could renovate instead. However, having found the Graven Hill project, the idea grew that this could be for us and in early 2016 we sold our smallholding in Somerset and moved to Bristol to be ready for when the first plots were released. While living and working in Bristol we started to formulate our ideas about the sort of house we wanted and our idea of a good day out became going to a Self-Build and Renovation show or visiting show houses to measure the size of rooms or touring around looking at stone quarries!
November 2016, with huge excitement, we reserved plot 91 and we start to put all our ideas into some concrete plans. We decided on a timber frame and that the walls will be local stone with a slate roof. We also went on a course 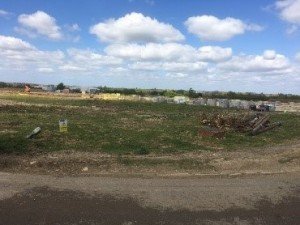 ‘Projecting managing your self-build’ and then engaged the course tutor to help us project manage until water tight!

The plans progressed through revisions and discussions and finally in September 2017 we got Conformation of Compliance, i.e. planning permission, and exchanged on the plot in December.

Our new project manager was to help us with the aspects of the build that we didn’t feel confident with and it was a great help with some of the technical aspects such as the balcony construction, finding a good stone mason and checking the foundations for the timber frame. However, we still wanted to project manage as much as we could and set about talking to local trades, getting quotes and setting timetables. Another lesson for us – almost nothing goes to schedule. We started with a 7-week delay in completing (a long story, I won’t bore you) but the frame finally goes up in late April. 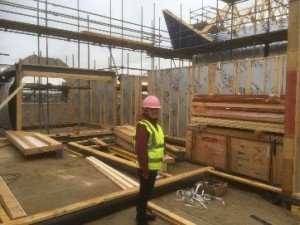 Early July and the roofers start together with the stonework and the windows are put in. And then the re-revised schedule goes to pot! The roof can’t be finished until the stone work completed, a 10-week job. This means the scaffolding in the kitchen can’t be removed so the house is not water tight and the screeding and plaster boarding downstairs has to be delayed. Looking on the bright side, we had one of the hottest summers on record, thanks goodness, not a single day lost to weather.

As much first fix electrics and plumbing were done as was possible and by mid-September, the stone and roof were finished.
The pace increased and the next three months was a frantic time for us with the work being done on second 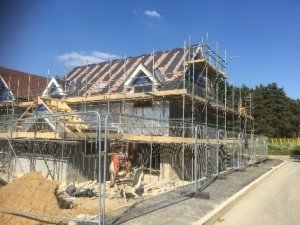 fix. At this stage we were on site most of the time, going home to eat and sleep. As well as the project managing, I was endlessly painting walls and ceilings while Philip dug the trench for the services and build our level access to the front door.
In the Grand Designs bingo style ‘we’ll be in for Christmas’ we made it, just!

So, how did the build go now that we have had time to reflect on the all of the work last year? Well, I remember that at the end of an exhausting week trying to move in, with people still working on the house and with months of decorating and landscaping still to do, I was asked whether I would do it again and answered ‘yes’ without 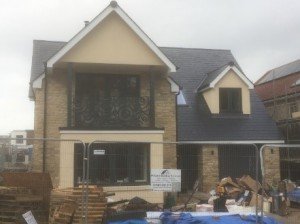 hesitation. That must say something!
Delays and problems are par for the course, a flexible and pragmatic approach helps in the stressful times.
There are so many different ways to approach a self or custom build house. The approach we took suited our skill set and our personal situation and we are thrilled with the result.
The project for 2019 – Finish the decorating, the external hard landscaping and the garden.

But most importantly I will relax and enjoy living on Graven Hill, it is a tremendously exciting project and I’m looking forward to being part of the community which will grow and develop in the next few years.

Hello 🙂 such an uplifting and ultimately positive read…it’s inspired me to stay positive too – we CAN all reach that point of moving in and embracing our Graven Hill Community 😀 happy days….xxx

Hi Nerina – you and Philip are definitely an inspiration to us all!!

Congratulations on building such a wonderful house – it’s definitely a great example of what can be achieved we put out minds to it. I think your approach of learning everything you can about project managing, and then hiring others to help where you needed to is a really sensible way of tackling it – a good balance between cost control and getting things done within a reasonable timescale.

I suspect many of us share a similar story of wanting to do self build but not be able to find the right opportunity – thank goodness for Graven Hill! I think I’d have driven myself crazy by now looking for a plot of land elsewhere.

And of course the delays… months seem to just disappear – as Miriam mentioned in her blog, self build and Graven Hill seems to have some sort of weird effect on time. But you kept calm, carried on and got in by Christmas – Kevin MCcloud would be proud (ooh, that rhymes!).

Look forward to seeing how you get on with the landscaping in your next post :p